Her future is cloudy. When grizzlies mix too freely with people, the grizzlies usually lose.

And after dozens of encounters with humans, Bear 148 may be shambling perilously close to that fate as she roams the Bow Valley in Banff National Park.

“This is a bear that, to date, has shown a very moderated response,” says Hunt. “She’ll tolerate less than ideal human behaviours time and time again.”

Bear 148 was born 6½ years ago near the mountain resort town of Banff. Her parents were both notable grizzlies.

Her mother, Bear 64, lived in the area for 24 years and raised at least two litters.

“She came to be very well known around the Bow Valley.”

Her father is the powerful and locally dominant Bear 122, known colloquially as The Boss, who has sired many of the area’s grizzlies.

For two or three years, 148 and her littermates — Bear 160, a sister, and her brother, Bear 144 — lived with mom. That’s long for a grizzly, says Hunt, but in Banff it takes a while to learn how to survive.

“There’s great habitat here, but a lot of Banff is rock and ice and it takes bears a long time to learn the complexities of these landscapes and where to find food at different times of year.”

Took over her mother’s range

The family split up.

Bear 160 hightailed to the backcountry, where she remains. Brother 144 roamed outside the park and eventually got into trouble at a llama ranch. He was destroyed.

Bear 148 stuck around and took over her mother’s old range in the Bow Valley.

She was well prepared. Her mother had taught her how to use the crossings over the Trans-Canada Highway, how to skirt along the edge of town, how to use wildlife corridors to stay away from people places.

Her mother also taught her about humans.

“(64) was very habituated and used to being around people,” says Hunt. “She had frequent encounters with people and never anything harmful. And I think this is where 148 has learned this confidence.

“She was used to seeing her mother when she was a young cub. If people got too close, her mother would huff or give a signal and then people would move off. This is a similar behaviour we see with 148.

“She’ll give a little huff and take two short steps toward somebody. Then she goes back to feeding.”

She does that a lot. There have been “many, many dozens” of recorded contacts between 148 and people. Staff track the bears by their numbered ear tags.

Many have been pleasurable. Hunt recently received a message from someone who watched the bear splashing and rolling about in a blue mountain lake to cool off.

Hunt has seen her himself on his morning bike commute to Banff.

Others have been a bit more nervy.

This summer, 148 has strayed onto a high school rugby field, charged a person walking with a stroller and chased dogs out for a walk with their owners. The bear has already been trapped and relocated to the far western edge of her range, but 148 wanders back within days.

Lee Garrett, an assistant coach with the high school girls rugby team in Banff, took this photo when Bear 148 paid a friendly visit to their practice. (Lee Garrett)

Nobody likes to think it, but the spectre of her brother’s fate is starting to hang over Bear 148.

Hunt emphasizes that she is not a “garbage bear” that hangs around human habitation in hopes of an easy meal.

“She is absolutely not interested in garbage at all. For a bear that spends that much time in and around the communities, the fact that she hasn’t become hooked on garbage or bird feeders really speaks to people’s commitment to not making that food available for wildlife.”

If Bear 148 is to continue rumbling up and down the lap of the Rockies in one of Canada’s most beautiful and busy places, people need to help her out.

They can do that by hiking or strolling through the woods in groups. Making noise. Carrying bear spray, especially while running or cycling. Keeping dogs on a leash or leaving pets at home. Not leaving food lying around.

Bear 148 has been bred twice this summer. Hunt would like to see her get every chance to bring her cubs into the same range where her mother birthed her.

“We’d just really like to encourage people to do their part.” 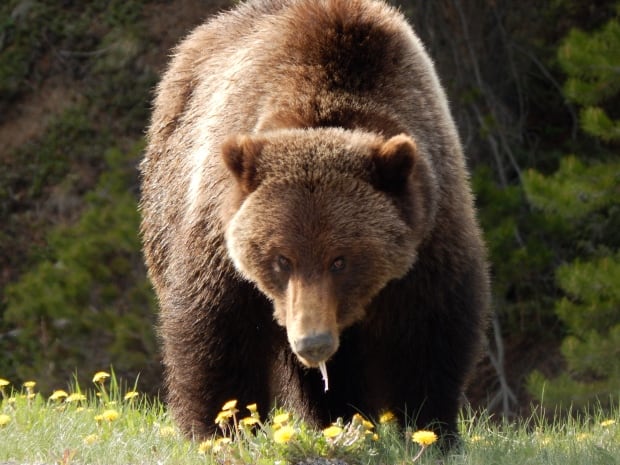 The grizzly has charged a man pushing a baby stroller, chased hikers and wandered through a high school rugby practice, but thousands of people in Banff and Canmore have petitioned the Alberta government not to consider killing the animal tagged as Bear 148. (Spencer Rettler)

Flames take over top spot in the West after beating Predators