Seth Rogen appears to be a hot commodity in transit circles.

Less than a week after TransLink proclaimed that the Vancouver-born actor and comedian would guest voice public-service announcements on buses and trains, the Toronto Transit Commission made a strikingly similar announcement Tuesday.

It said Rogen had lent his voice to “a series of quirky public service announcements focused on etiquette and courtesy while riding the TTC.”

In a statement, Toronto Mayor John Tory said the move is an “example of how we’re moving the TTC forward in new and innovative ways.”

Liza Levie, who stood outside of Vancouver’s Stadium-Chinatown Skytrain station on Tuesday, had a different take: “Thieves.”

Rogen grew up in Vancouver and still splits his time between the city and California.

“I have a lot of pride in the city, so I’m very happy to be associated with it as I am,” Rogen told CBC News when explaining his decision to work with TransLink.

That local tie is partly why the Toronto announcement had some transit riders perplexed.

“I think it’d be cool if they got someone from Toronto to do theirs,” Evan Jacobs politely suggested. 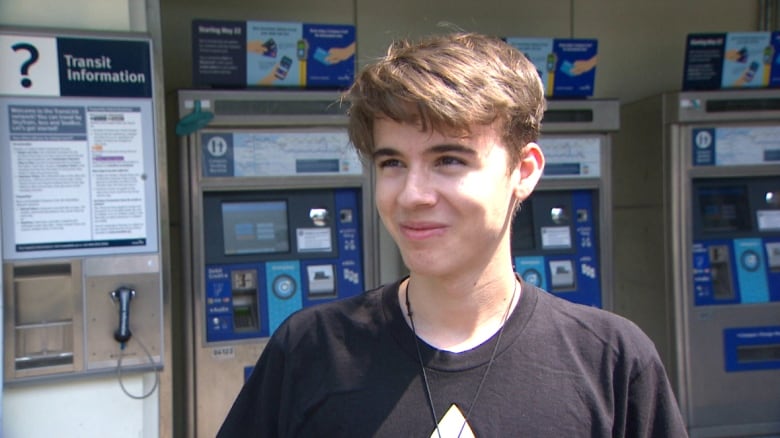 The response was just as pointed online.

This is neither “new” nor “innovative”, <a href=”https://twitter.com/JohnTory?ref_src=twsrc%5Etfw”>@JohnTory</a>. This makes sense for Vancouver as Seth Rogen is from there. Why are we copying them instead of getting a Toronto-originating/based celebrity? If you want a mid-30s white dude why not <a href=”https://twitter.com/MrKristianBruun?ref_src=twsrc%5Etfw”>@MrKristianBruun</a>?

This is a great way to honour Seth Rogen. To hear his voice on the TTC is commendable. His fame will bring us to feel more Canadian and bring unity to the people at large. We love Seth. He is a loyal Canadian.

‘Look in your own backyard’

“We’re excited that it’s spurred other transit authorities to follow suit,” he said.

TTC said Rogen came on board following a Twitter chat with Toronto Coun. Norm Kelly, who had noticed Rogen’s offer to TransLink.

“It also gives us a bit of spotlight as well,” said TransLink’s Willis. “We were kind of out of the gates first. We’re all friends with the transit authorities.”

However, Willis encouraged transit providers to consider other voices.

“If you want to use Seth, go for it. But there’s also a lot of awesome talent in Canada — local and undiscovered talent, too. Look in your own backyard.”