As the sun went down in Penticton, B.C. on Wednesday, candles were handed out in Gyro Park, where hundreds gathered to pay their respects to the four people killed two days earlier.

The Okanagan city of 30,000 is still reeling from Monday’s shooting, which left four residents of the same block dead.

John Brittain, a 68-year-old retired city worker, has been charged with three counts of first-degree murder and one count of second-degree after he turned himself in to police.

Police have said all the people involved were known to each other, but they have not determined a motive. RCMP did not release the identities of the victims, at the request of their family members.

But in this small city, everyone knows everyone, as residents are quick to say.

Hundreds gathered in Penticton for a candlelight vigil to honour the four victims who were shot on Monday. <a href=”https://t.co/GhaeiNS2rx”>pic.twitter.com/GhaeiNS2rx</a>

Shaelyn Maxted lives just down the street from where some of the victims lived. She said she didn’t know them well, but had spoken to them a few times.

“It was simply a ‘hey neighbor’ kind of thing. But it’s affected the community we’re in,” Maxted said, adding she hopes events like the vigil will help the community heal.

“It shouldn’t destroy the neighbourhood. It should bring people closer together.”

Jade Turta, 25, was working a cashier shift at Rona’s when she heard police were warning residents that a shooter was on the loose. She said her manager rushed down, telling them to be vigilant about who entered the store.

“I was at work so it was really, really terrifying, it just became really real,” she said.

Turta has lived in Penticton her whole life and has a distant connection to one of the victims through her father. She, too, hoped the vigil will bring some solace.

Penticton Mayor John Vassilaki, who has lived in the city for 63 years, said he’s never seen anything like this before.

“It’s not easy for the community to go through such a horrific thing that happened. It’s going to take them a long, long time to forget it but we’re a vigilant community, we get together and we’ll continue to unite and to go forward,” Vassilaki said.

He said he hasn’t yet spoken to the families of the victims, as they’ve asked for privacy. 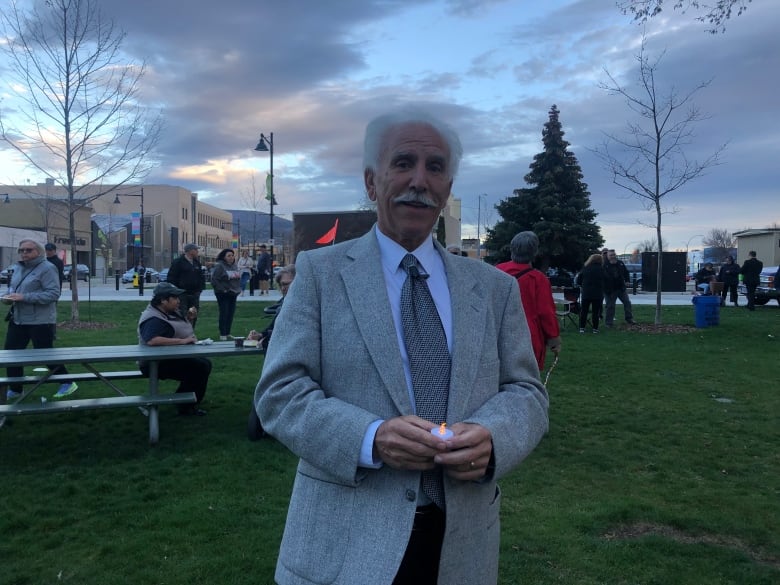 Penticton Mayor John Vassilaki, who has lived in the city for 63 years, said he’s never witnessed anything like what took place on Monday. (Dominika Lirette/CBC)

The vigil was organized by the Penticton & Wine Country Chamber of Commerce and the Ooknakane Friendship Centre after an outpouring of social media posts calling for the community to come together.

Matthew Baran, the friendship centre’s executive director, said he recognized the need for such an event and felt the centre was equipped to take it on.

“We’re not normally forced to cope with situations like this. A lot of people on social media were saying things like ‘this isn’t the Penticton I know.’ It’s shock waves that are going to impact our community,” he said.

“This is kind of the opportunity for us to see the strength and resilience of our community and to really shine. I’m hoping people will come together and see each other … and see that they’re hurting too and ease each other’s pain.”

Bad Behavior in the House