Pilots from the airbase in Cold Lake, Alta., have a special mission this holiday season: escorting Santa Claus.

Lt.-Col. Forrest Rock, who will be leading the Christmas Eve contingent of CF-18s, said the goal is to support Norad — the North American Aerospace Defense Command — to track Santa and him guide through Canadian airspace.

“We’ll kind of fly alongside him, a bit behind him as well,” Rock said. “Just escorting him. Whatever he needs. Getting him where he needs to go.”

To take part in the mission is a privilege for Capt. Kevin Mittleholtz.

“Growing up, most kids never get a chance to see the big guy in person,” he said. 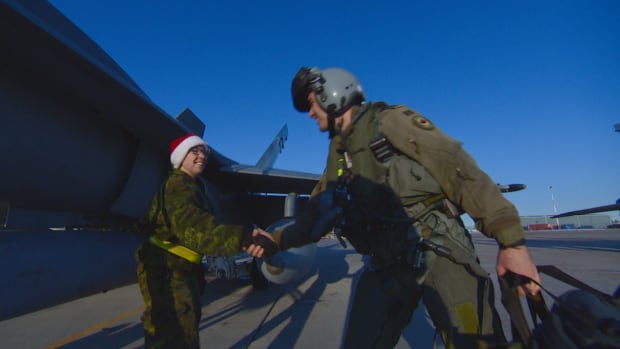 CF-18 pilots from the 401 tactical fighter squadron in Cold Lake, Alta. are preparing to work with Norad to escort Santa and his reindeer through North American airspace on Christmas Eve. (Brent Roy/CBC)

The pilot said he still has some questions he’s hoping to clear up.

“Interested to see exactly how it works with the reindeer, first of all. And at the speeds that they’re going to be flying, how Santa keeps warm in the open sleigh.”

Cpl. Kevin Richmond said the focus is on making sure Santa can get his  job done.

“It helps all the kids across the world get all these gifts and make sure Santa gets there safely,” Richmond said.

Norad has been tracking Santa on Christmas Eve for more than 60 years.

We need to fix up 17th Avenue, but we’d better not screw it up