An acquaintance recently revealed that he and his wife have given up all animal-based foods, opting, instead, for the animal’s feed — or, a “plant-based diet” as he put it.

This, from a brawny, Carhartt-clad Prairie boy whose job it is to carry asphalt roofing shingles up and down a ladder all day, was surprising to me.

That body needs meat, I thought.

I have nothing against plants. It’s just that a meal of them rarely satisfies my hunger.

Well, I am here to announce that I just got schooled. That’s right; I ate a vegan pizza (amongst other things), and I liked it. I was also stuffed to the gills.

To add to the challenge of a menu without egg, dairy, meat and seafood, the pizza dough is also offered gluten-free

King oyster and lobster mushrooms are used to mimic the seafood in a rich, cashew-based chowder, hearty with potatoes and corn, and crowned with a gigantic breadstick seasoned with smoked paprika, cane sugar, crushed pepper, and salt.

From a visual standpoint, it’s not the prettiest breadstick. If Cheech and Chong made another movie, it would be a fitting prop, if you get my drift, but taste-wise, it’s a perfect complement to the soup.

A feature soup of carrot, yam and ginger scored just as well. Enjoying this luxurious, robust broth on a cool October day felt like getting a hug from mom.

The beet salad, too, was fitting for the inaugural autumn menu and easily shareable for two people. Candied walnuts offer a sweet crunch, and cashew sour cream tempers the earthiness of the beets.

A sprinkling of basil adds a refreshing, finishing touch.

With only five pizzas on the list, the choice should be simple, but it is not. The struggle came in deciding between the pie with black garlic and truffle, or pulled pork.

The pork here is not pork, of course, but jackfruit, a football-shaped oddity grown in India and Southeast Asia. When unripe, the fruit exhibits savoury characteristics with a texture akin to meat. When ripe, the fruit is sweet, making it a very versatile ingredient when it comes to plant-based cookery.

The jackfruit worked, although it had to compete with some heavy-handed chipotle aioli used as the base sauce. 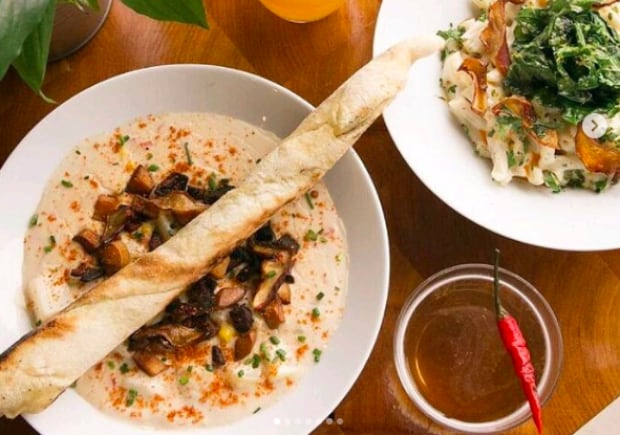 The dough, like the breadstick, was nicely baked and seasoned but the staff would do well to sweep away ash crumbs left in the oven before inserting new pies.

The only complaint with that pizza was the bitterness imparted by those pesky ashes.

Kale is the favoured green in Die Pie’s Caesar salad where crispy chickpeas take the place of croutons and king oyster mushrooms mimic bacon. The garlic dressing does a solid job of enlivening these greens that many eaters consider “so yesterday”.

The sodas are from Phillips Soda Works of Victoria, a small brewery that prides itself on recipes free of corn syrup and artificial colours and flavourings.

One way to knock off the impending chill is to hunker down over a turmeric latte, so oddly addictive you might order a second.

The almond- and rice-based smoked Horchata cocktail also offers warmth, but by way of mescal and tequila in this case. If you order two of these, though, you might not make it out of your chair. Fair warning.

You can hear Campbell’s reviews on Edmonton AM every second Friday. You can also see more of her reviews on her blog, Weird Wild and Wonderful, and can follow her on Twitter at @wanderwoman10.

Music with a message: How growing up on reserve shaped the Snotty Nose Rez Kids