An Edmonton police officer attacked last weekend was honoured by the Oilers ahead of their home opener against the Calgary Flames on Wednesday night.

Const. Michael Chernyk received a standing ovation as he walked on to the ice during a pre-game ceremony and stood beside anthem singer Robert Clark for his performance of O Canada.

Chernyk was handling crowd control at a Canadian Football League game on Saturday night when he was hit by a speeding car that rammed through a barrier and sent him flying five metres through the air.

The driver got out, pulled out a large knife and began stabbing Chernyk, a 10-year veteran of the police force, as he was lying on the ground. Chernyk fought back and the suspect fled on foot. 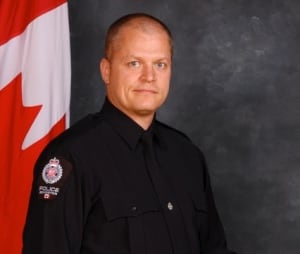 Before police could arrest the attacker he hit four civilians with another vehicle he had been driving.

Edmonton police Chief Roderick Knecht was also present on Wednesday as the Oilers played a video honouring the victims of the attack as well as police and other first responders.

Abdulahi Hasan Sharif made his first court appearance Tuesday on 11 charges, including five of attempted murder.

Expectations high as B.C. government gets set to release climate plan on Wednesday