There was a haze in the air across parts of B.C.’s Lower Mainland and up Howe Sound on Tuesday morning as wildfire smoke from the central part of the province drifted west.

“Unfortunately when there’s fire, there will always be smoke. We’ll probably have to deal with the smoky skies for another day or so,” said Environment Canada meteorologist Cindy Yu.

Until recently, the region had escaped the smoke from the wildfires burning in the province’s Interior, which have forced the evacuation of 40,000 people and the destroyed a yet-unknown-number of homes.

But on Monday, winds began blowing some of the smoke westward. It settled into valleys and along the coast overnight, meaning that many drivers had a hazy commute into Metro Vancouver.

“We are dealing with a large plume of smoke in the Interior as well as some of the nearby forest fires, and because of that we are seeing some of the smoke drifting more towards the coast under a very stable air mass,” Yu said.

For most of the southern coast, there’s little health risk associated with the haze, she added.

The only exception is in the eastern Fraser Valley, where a 188-hectare wildfire has been burning at Harrison Lake since the beginning of the month.

The Air Quality Health Index (AQHI) there is forecast to hit 4 Tuesday, meaning there’s a moderate risk to health. That means anyone with heart or breathing problems should consider reducing outdoor activities if symptoms flare up.

Smoke from the wildfires settled into valleys and along the coast overnight. (Catherine Rolfsen/CBC News)

A change in the weather is expected to come by Wednesday night, causing the smoke to dissipate, according to Yu.

Closer to the wildfires that have burned their way through the central part of the province, however, air quality continues to be a concern.

It is now so smoky in Kamloops that you can look right at the sun. 7:47 p.m. #BCWildfire #BCfires pic.twitter.com/XEW11EoPI1

Environment Canada is warning residents of southeastern and central B.C. about the possible health impacts of smoky air. The smoke has drifted through Alberta and as far east as Saskatchewan, where air quality alerts remain in effect.

Once again, Williams Lake had the poorest air quality in the province Tuesday, with the AQHI hitting 18 in the early morning.

Kevin Skrepnek, fire information officer for the B.C. Wildfire Service, arrived in Williams Lake on Saturday, and said the visibility there has been poor every day.

“Our crews are out on the line, in many cases 10-12 hours a day, so we have to be managing their health,” he said. 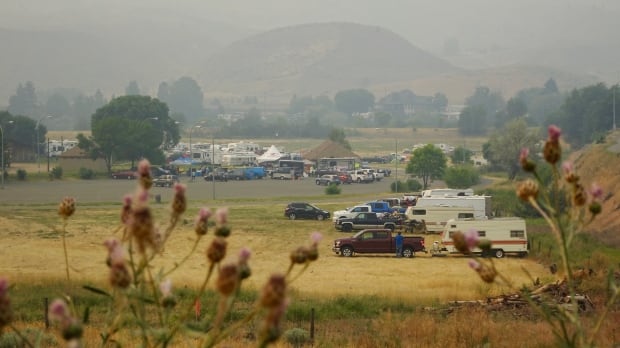 A smokey haze from wildfires hangs over the Kamloops Powwow grounds where evacuee campers and RVs are parked. (Lien Yeung/CBC)

Charges for bat-wielding man in confrontation caught on camera