A historic downtown Halifax wall was peppered with graffiti over the weekend with chalk writing that boasted a message of white supremacy.

“We had been driving down Brunswick [Street] and one passenger noticed it said ‘praise KKK’ on the wall,” Butt said.

The messages were spread across the entirety of the Brunswick Street wall, according to Butt, who tried contacting the city and Parks Canada to have the words removed.

READ MORE: Rally in ‘solidarity with Charlottesville’ to be held at Halifax’s Cornwallis statue

“There was some messages about the Proud Boys, like ‘God Bless the Proud Boys.’ Just like the alt-right movement, free speech was a big thing on the [graffiti],” Butt said.

The Proud Boys are a white nationalist men’s movement.

Five members of the group interrupted an Indigenous ceremony on Canada Day in Halifax.

The men were also members of the Canadian Armed Forces. Their actions were condemned by military officials and were recently the subject of a military investigation.

WATCH: The interruption of an Indigenous protest by Canadian Armed Forces members representing the “Proud Boys” organization has many wondering who the “Proud Boys” are and what their presence means in Canada. Dave Squires has more on that story. 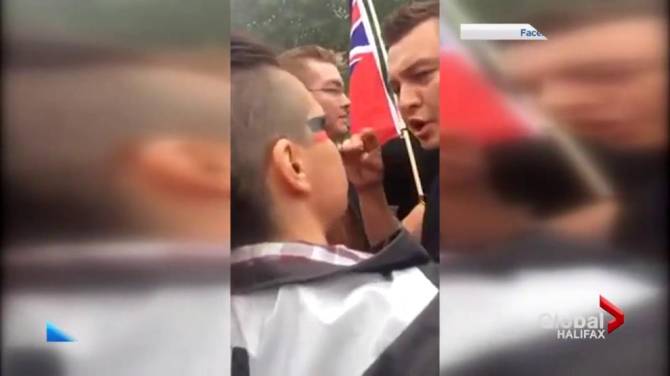 Halifax Regional Police say the graffiti incident was filed by an officer.

“The writings [chalk messages] were logged by a patrol member that was walking by. She logged a call and requested our Forensic Identification Unit come and document the writings,” said Const. Dianne Penfound with the Halifax Regional Police.

The messages were still visible on the wall by Sunday, prompting Butt to contact the city and Parks Canada to report the graffiti.

Both organizations confirmed to Global News that the complaints were made.

READ MORE: Charlottesville protest: Who united against the white nationalists?

The city sent members of Transportation and Public Works to wash off the chalk messages.

“I’m happy it’s off the wall, but I think it’s important that people know [racism] does exist here and you can’t turn a blind eye to it,” Butt said.

Penfound says its important for these incidents to be reported to police as soon as they’re noticed.

“We would ask that people call as soon as possible because we want to be able to document what is there, and in this case I believe the writings were in chalk, so time is of the essence,” she said.