A group of Edmonton doctors has created a new take on the popular Cards Against Humanity game. They developed “Doctors Against Tragedies” as part of a campaign to teach people about the risks of fentanyl use.

The group of healthcare workers noticed a growing number of organ donations coming from people who had overdosed on the drug, prompting the idea for the educational game.

One of the game’s founders spent months researching ways to inform people about the dangers of fentanyl — but she didn’t want to use fear tactics.

“I looked at a game that already grabs the attention of users and how to use that concept of that game to bring about fentanyl awareness and fentanyl education,” she said. 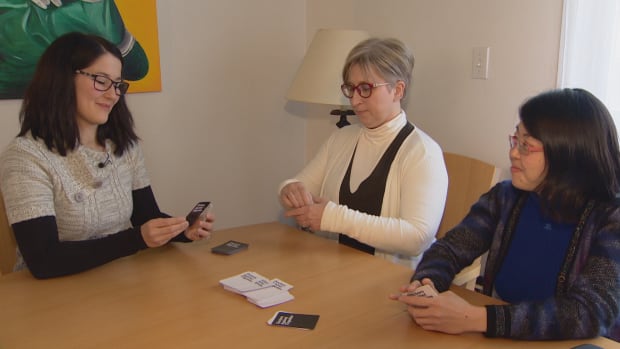 After getting the go-ahead from Cards Against Humanity creators to mirror the game’s style, the team of medical experts made their own version with help from colleagues across the country.

They came up with two versions of the game, Maruyama said. One features trivia questions suitable for people aged 12 and older. The second version is for adults, and mimics the casual tone of Cards Against Humanity.

Cards feature information about the signs of overdose and the risks of recreational fentanyl use.

“The focus of the campaign really is on young adults who may be using the drug recreationally and trying to give them good choices,” said Dr. Cheryl Mack, one of the game’s creators.

She said the doctors plan to take the card game to local schools to teach teenagers and university students about the risks of using fentanyl recreationally.

They also hope to raise money to get the game printed professionally, so they can leave copies of it in pubs and coffee shops around Edmonton.

The Doctors Against Tragedies game is free for people to print online.