An Alberta family has a lot to be thankful for this weekend, after days of desperately searching for their horse ended in what they call a ‘miracle.’

On Monday, the Danyluk family got a call saying their horse, Digger, wasn’t in his pen at the farm, just outside Abee, Alta.

Kristiana Klause says her mother spent at least 50 hours driving around and searching for Digger, her horse of 17 years.

“I had offered to print posters and come out on Friday and help look,” Klause said.

“I was on my way out, and all of a sudden I get a call from [my mother] and she’s just frantic, and telling me he is in a hole.”

Klause said her mother had gone back to the pen to check on her other horse, when she heard a sound.

It was Digger. He had fallen into an old sewage hole that had been hidden beneath rotted wood and grass. 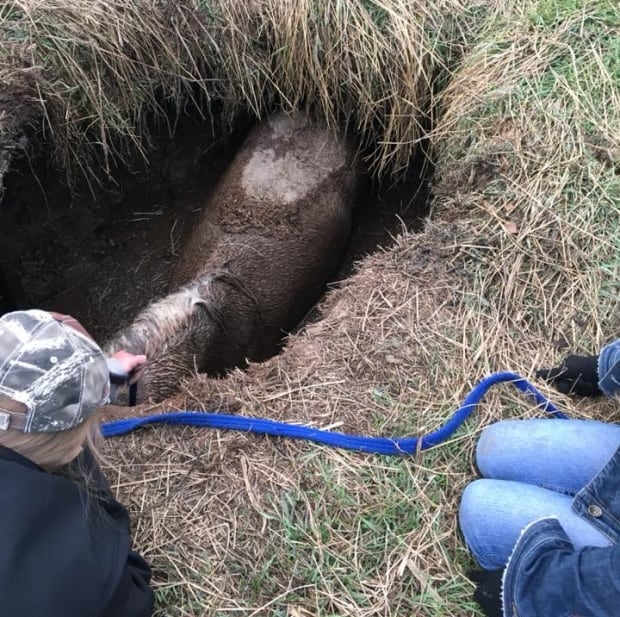 Digger spent 5 nights and 6 days in the hole before he could be pulled out. (Facebook/Kristiana Klause)

Digger had been mostly submerged in sewage water for six days and five nights.

“I swear if it was more than another hour or two he wouldn’t have, because the whole time that we were there we were holding his head out of the water,” she said.

“It really is a… miracle, he didn’t impale himself on anything.” 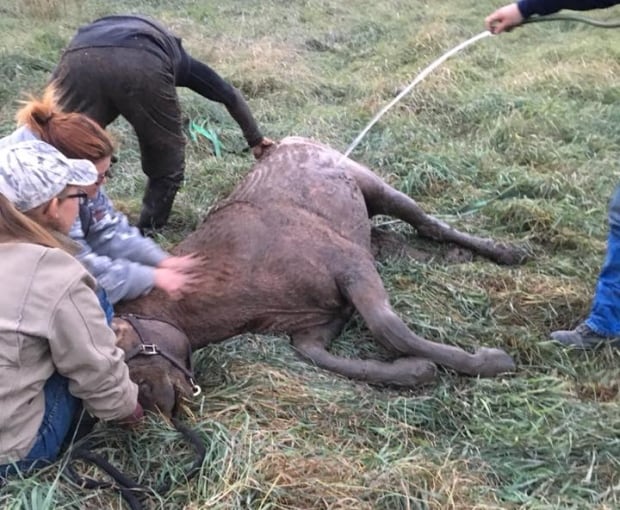 With the help of the 15 to 20 people Digger was rescued. (Facebook/Kristiana Klause)

Klause said Digger didn’t appear to have any obvious injuries, which was surprising with nails and glass in the hole.

She called everyone she could think of to help free the horse.

It took a team of 15 to 20 people to figure out the best way to help free the weak horse.

Klause said the veterinarian and farrier ended up getting in the hole with Digger and strapping a harness on him.

The harness was strapped to a backhoe, which slowly lifted the horse of the hole. 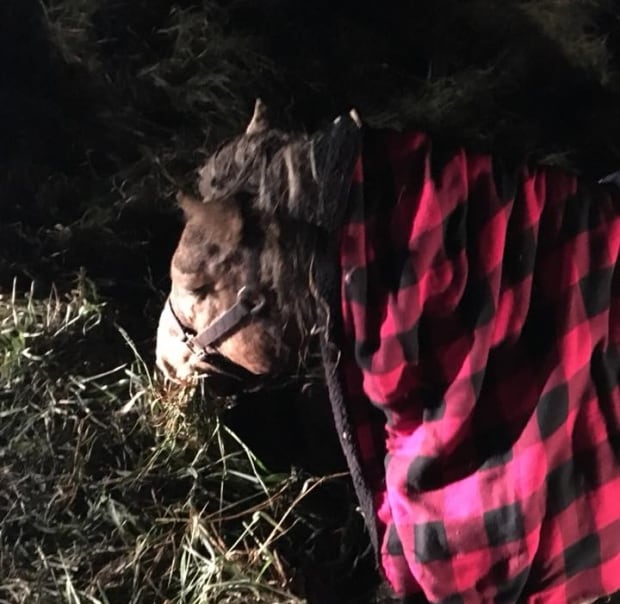 Digger was a very hungry horse and immediately started eating grass and even some Timbits after he was rescued. (Facebook/Kristiana Klause)

“They laid him down on the ground. And immediately we started washing and blanketing him because hypothermia and everything,” Klause said. “And he literally laid there for four hours and just slept.”

Digger was extremely weak after so long in the water and needed 16 litres of fluids by IV before he could stand.

Hydrated, it was actually a beloved Canadian treat that got him up and walking.

“We had a box of Timbits. He kept coming towards me and walking because he wanted a Timbit. So we were leading him around the field bribing him with Timbits,” Klause said.

Digger isn’t out of the woods yet. He’s still at risk for several infections.

But Klause says it was better ending than they expected.

“I know it sounds super weird but my grandfather died a year ago on Sept 30. And it was actually this weekend that we buried him,” she said. “If he’s an angel, he was there.

“And it’s pretty funny because this particular horse bit my grandfather one time really bad. We were joking that he was watching over him.”

The family has now set up a GoFundMe page to help pay for Digger’s veterinary bills.