City council approved the consolidation of the Edmonton Expo Centre with the Shaw Conference Centre Tuesday.

A private report to council recommended the Edmonton Economic Development Corporation (EEDC) take control of the Expo Centre from Northlands and merge its trade show operations with the downtown venue.

“We’ll be able to … create more hospitality jobs not just at the conference centres but in our hotels and in our restaurants,” Iveson told reporters Tuesday.

Brad Ferguson, the president and CEO of the EEDC, said in a statement that the organization is “grateful for [the] vote of confidence” put forward by council.

Council decided the specifics of the consolidation behind closed doors. While they haven’t ironed out all of the details yet for a smooth transition, Iveson said there is still a timeline in place.

The transition of current employees to the EEDC will take place by January 1.

The Expo Centre will continue to have its own staff, but Iveson said they will “benefit from the expertise that they both have.” 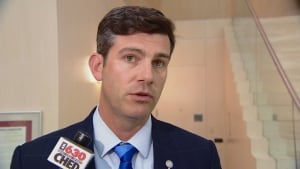 “For us as a city, this is good,” Coun. Tony Caterina said. “We’re finally at a point where we know what’s going to happen.”

The Expo Centre is currently owned by Northlands, a non-profit struggling to pay its debt to the city.

‘Shouldn’t be a surprise to anyone’

Northlands’ debt history stretches back to 2009 when it asked the city for $48 million to renovate Rexall Place. The debt was supposed to be repaid in full by March 2034.

Northlands has deferred its twice-yearly payment of $2 million since last September.

Iveson said there is enough room in the city’s budget to forgive Northlands’ debt and there will be no impact for taxpayers.

“We all knew the Expo Centre was unviable under Northlands,” Iveson said. “The city is getting a more-than-$100-million facility but is also going to have to take on the debt … that shouldn’t be a surprise to anyone.”

Details of the EEDC transition are expected to be released to the public on September 12. Iveson said the future of other Northlands properties, such as the race track and coliseum, are still undecided.

Community groups want CDN-NDG to get tough with slumlords