A group of blind hikers set out to prove their potential by tackling one of the hardest urban hikes in the Vancouver area: the Grouse Grind.

The nine young hikers were accompanied by individual guides up the 2.9-kilometre trail up the face of Grouse Mountain Sunday after spending months training.

With 2,830 stairs, the Grind — which is jokingly known as “Mother Nature’s Stairmaster” — is challenging even for experienced hikers let alone those who are visually impaired.

But Shawn Marsolias, the founder of Blind Beginnings, the charity organizing the hike, said it’s all about dispelling myths.

“Everyone has limits but when you have a disability people, often decide your limits for you and often they are wrong,” Marsolias said. 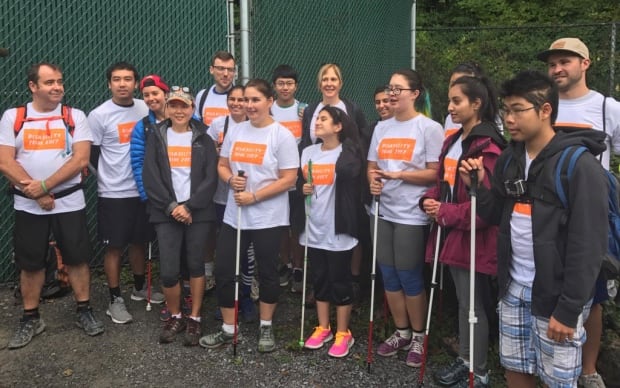 Nine hikers who are blind or partially blind took on the Grouse Grind on Sunday with the help of individual guides. (Deb Goble/CBC)

‘It doesn’t matter whether I can see’

Harjinder Saran, one of the hikers, has been partially blind since birth.

“I could see colour when I was younger and shadows and light, but as I got older, that slowly deteriorated,” Saran said.

Today’s activity is personal, she said.

“I wasn’t able to do that and I think this is a great way to even show myself that I can do these things. It doesn’t matter whether I can see.” 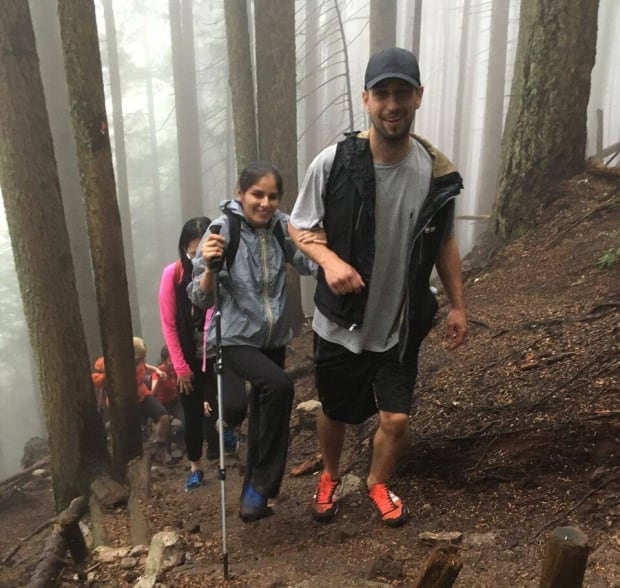 Harjinder Saran has been training for the event by completing other hikes around the Lower Mainland since May. (Blind Beginnings/Facebook)

Since May, Saran has been working with her guide doing different walks and hikes around the Lower Mainland to prepare for the grind.

“When I started, it was really hard because I never had done physical activity,” Saran said. “As I went on with the training, it’s actually helped. I did exercises in between my training, walking up and down hills. A little bit of running up and down stairs.”

Each hiker holds onto his or her guide’s elbow. The guide verbally tells their hiker where the steps are and the hiker uses this verbal cue and a white cane to feel the ground and stabilize with their feet.

Christina Duncan, another guide who works as a recreational therapist, says she’s happy to provide support for the hikers.

“I’m a pretty avid grinder,” Duncan said, adding she usually completes the Grind in an hour. 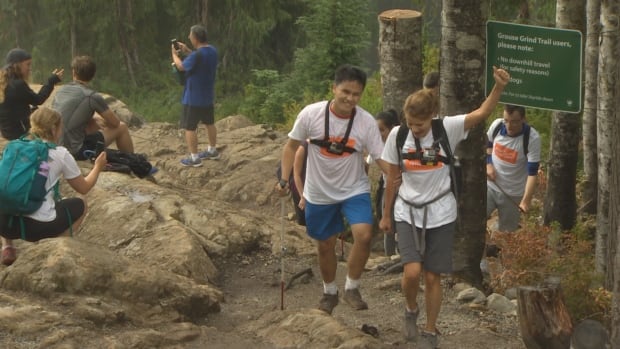 Clement Chou and his guide Christina Duncan completed the Grouse Grind in an hour and 44 minutes. (CBC)

She guided hiker Clement Chou who she has known since he was nine. Together, Chou and Duncan were able to finish the Grind in an impressive one hour and 44 minutes.

“I really hope this does spread that kind of awareness that assumptions should never be made before a chance is given,”Chou said.

“The biggest disservice you can do to these youth is telling them they can’t,” Duncan added.

With files from Deborah Goble