A wildfire near Kamloops, B.C., that was burning all weekend is under control, according to the B.C. Wildfire Service.

The fire started off of East Shuswap Road on Thursday and grew to over 500 hectares.

“As of [Sunday], the status of the fire did change from out of control to being held,” said Claire Allen, an information officer with the B.C. Wildfire Service.

“That means that with the current resources and conditions that we have on the fire, we are not anticipating any growth beyond that 545 hectares.”

More than 100 ground personnel are fighting the fire, supported by two helicopters and four water tenders.

Allen said it is difficult to estimate exactly when the fire will be put out as it continues to burn in several hot spots.

“We can still see that it is putting out a bit of smoke but certainly nothing as substantial as what was put out at the start of the weekend,” she told Shelley Joyce, the host of CBC’s Daybreak Kamloops. 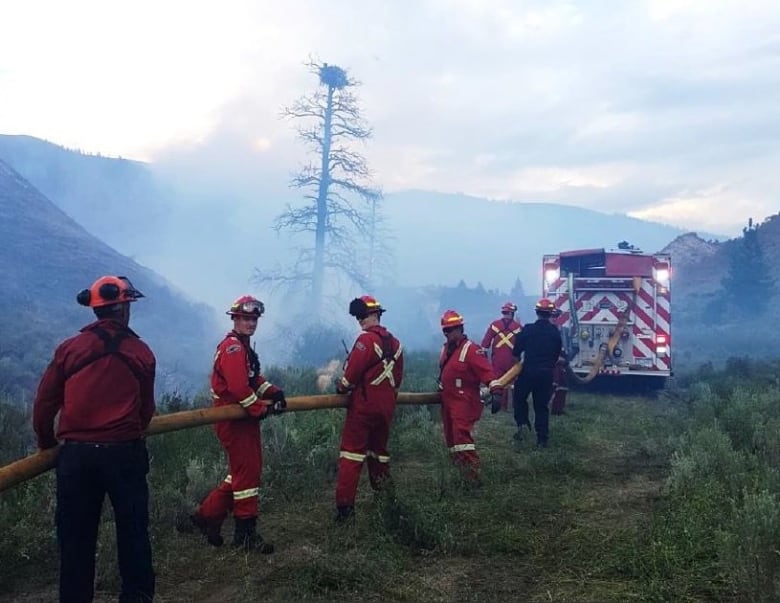 Fire crews work to save an eagle nest and the eaglets inside it in Kamloops over the weekend, after flames from a nearby wildfire trapped two eagles who are too young to fly. (Twitter/BC Wildfire Service)

A dozen fires burned across the province over the weekend, with two new ones starting in the Kamloops area and one in the Cariboo on Sunday, due in part to a heatwave and significant winds.

Some areas of the province are “pockets of extreme fire danger,” she added, places like Lytton, Lillooet, Merritt, the Okanagan Valley, Southeast Fire Centre and the Oliver-Osoyoos area.

“Any human-caused fire diverts our resources away from responding to naturally caused lightning fires, so it’s incredibly important for folks to be cautious with any burning or any activity that might lead to a wildfire,” Allen emphasized.

More than 100 ground personnel fighting the fire off East Shuswap Road since Thursday 3:50

With files from Daybreak Kamloops.

Canadian News – Both the car and their wedding plans are a write-off, but B.C. couple unbowed by wildfires #News in #Canada