Bike lanes could soon be coming to the 109th Street strip between Saskatchewan Drive and 76th Ave.

The stretch of road is a main connector between south Edmonton and the downtown core. It is lined by a number of mature areas including the communities of Garneau, Parkallen and McKernan.

Previously, the city had launched the Envision 109 project which was meant to improve the streetscape and foot traffic along the main route according to the city’s website. The city says that project was put on hold in August 2018 due to “other independent infrastructure planning studies.”

Now the Urban Planning Committee is set to hear the latest from those studies on Tuesday at city hall.

Kim Clegg with the Queen Alexandra Community League was a part of the Envision 109 team originally and says he will be watching the upcoming discussion closely.

“109 Street is almost uncrossable and can be unwalkable, especially in the winter,” Clegg said. “It creates a huge barrier between the communities on either side of it. Children often go to schools on the opposite side of 109th and parents expressed that they did not feel their kids were safe crossing 109th, even at intersections.”

He said the speed of the traffic and width of the roadway are a big part of that. He also said bike lanes weren’t really the focus of Vision 109.

“The [meetings] revolved around creating a better, more walkable and safe 109th Street, with bike lanes being a second priority after that,” Clegg said. “There were many ideas kicked around as you know but nothing was ever decided upon, even casually.”

A city report shows that 109th Street operates at near-capacity during peak traffic times and bike lanes would reduce the roadway from six to four lanes.

The same report also says that 110th Street should be considered as a bike lane route, even though it would have a greater impact on the number of on-street parking stalls than a bike lane on 109th Street would. 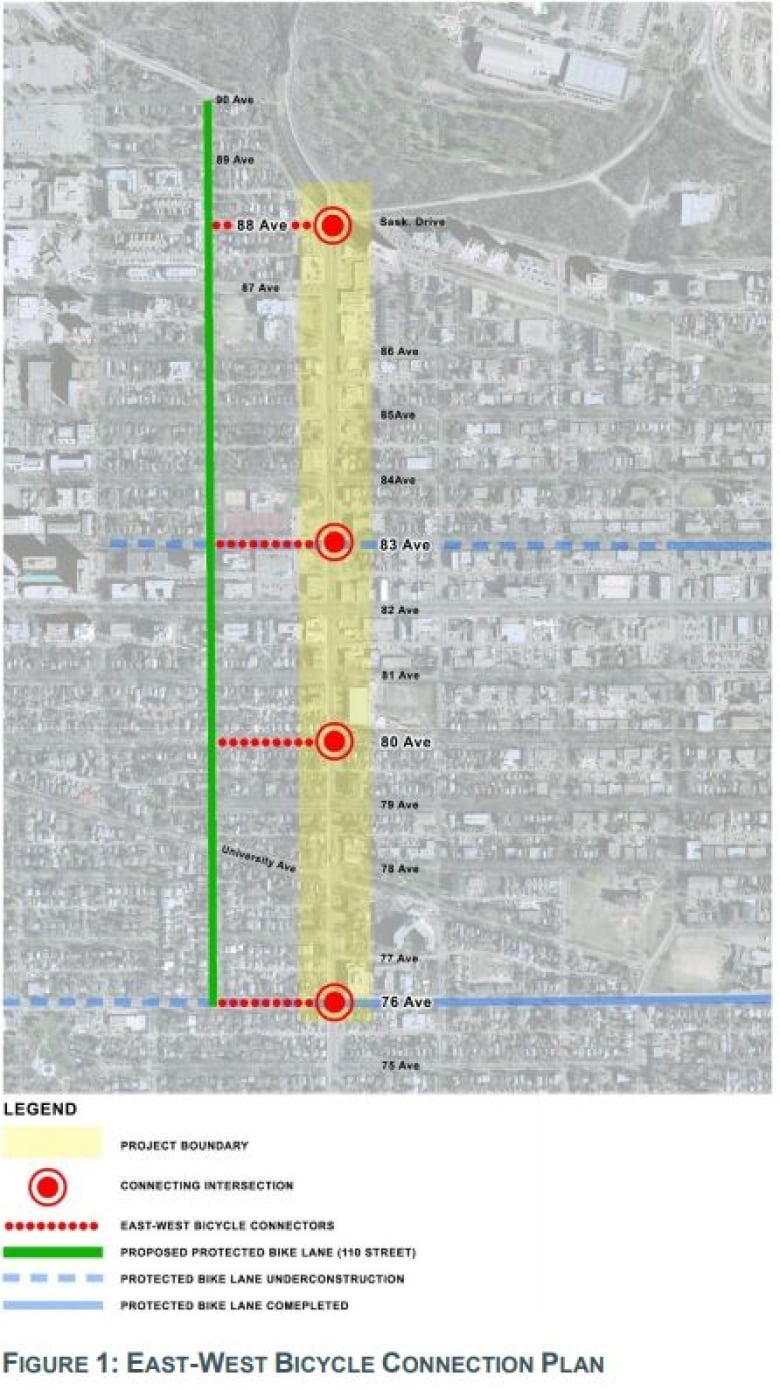 A city map shows options for a 110th Street bike lane project and how it would line up with bike lanes already in the Garneau area. (City of Edmonton)

Ward 8 Councillor Ben Henderson says both roads have advantages but arterial roads like 109th Street offer the most direct route for drivers and cyclists.

“I think also in a main street context, where we’re trying to support the businesses along there. Encourage the businesses. Make it kind of a more people space rather than a car space. There would be huge advantages to putting the bike lane along there.”

Henderson says the bike lanes that already exist in the area are seeing a lot of usage and that growing the network out from the central areas of the city is working well so far.

The report says the 109th Street bike lane option would cost an estimated $2.4 million while the 110th Street route would cost $1.2 million. The total cost of the south side bike network through Strathcona and Garneau has been estimated at $8.2 million and is included in the city’s 2019 to 2022 Capital Budget.

SPRAY: Simple advice for using bear repellent in a can